Franco Bacigalupi a Piacenza Man in the Flak
By Paolo A. Dossena and Arrigo Francani
​ 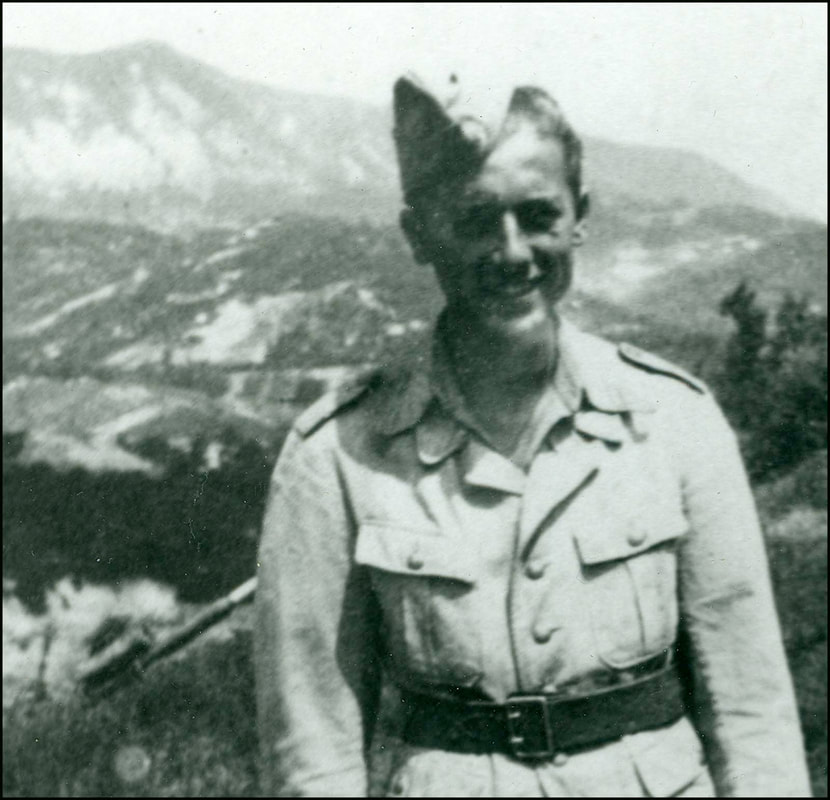 Franco Bacigalupi (in full German uniform) at the time in whitch he served in the Flak
​
In 2018, Paolo A. Dossena came down from Lugano (Switzerland) and showed up in Alseno (Piacenza, Italy) were he was welcomed by his friend Arrigo Francani.
Arrigo Francani is an expert in history and uniforms. He is also one of the managers of the Piacenza Partisans Museum (Sperongia, in the Morfasso, in the Piacenza Province).
Francani took Dossena to visit Franco Bacigalupi (1924-2019) a veteran of the German Flak.
What follows is the interview which Mr. Bacigalupi granted to Francani and Dossena
​
The Interview
‘He was machine gunning us…had I thrown myself to the ground I would have been a perfect target, however, I saw him in the machine gun sight and…’
A boy left alone against a P-47 Thunderbolt fighter-bomber on the background of a totally destroyed town (Pontelagoscuro, 1944).
Starting from the beginning, a basically unknown historical fact is the story of those 84,000 Italians (including 677 women) who, after the 8 September 1943 events, joined the Flak (the German AA defences). These women and men served in Germany, in France, in the Protectorate of Bohemia and Moravia and in Italy.
For instance, the 4th German Battery of the artillery group schwere Flak-Abteilung 311 (v) was composed of Lombards of the classes of 1924-1925. These men had received a draft card from the RSI but they had then been enlisted by the Flak. Once in the battery, which was under the command of Lt. Thoma, they replaced German soldiers and former Soviet POWs that had moved to the side of Germany.
Mr. Franco Bacigalupi, 95 years old, was born and has always been living in Alseno (Piacenza). He is a veteran of the 4th Battery and he kindly granted this interview.

Mr Bacigalupi, where was your battery stationed?
At first we were stationed in Seriate, then they moved us to Treviso. On 7 April 1944 (Good Friday) the city was bombed and destroyed. We went to pull the corpses out of the rubbles and we loaded them on the lorries. The Americans bombed Treviso by mistake, they actually wanted to bomb Tarvisio.

It was a very persistent rumor, but according to the historians it was an unreliable one.
I do not know, this news was circulating among us.
Was the 4th German Battery defending the Direttissima Railway Line between Bologna and Florence? Did you meet the Czech soldiers from the Government Army of the Protectorate of Bohemia and Moravia? At the time, they were guarding those tracks.
Yes, at a certain point we had been deployed between Bologna and Sasso Marconi, but we did not see any Czech soldier. Our unit kept moving, one day we were in one place five days later we were in another one. Each German battery had six 88-mm cannons, and our cannons were named Anton, Berta, Cesar, Dora, Emil, and Frieda. Then, we also received Gustav and Hermann. Cesar was our cannon, I was the gun layer.

In some Flak units there were also a few former Soviets. Were there any with you?
With us there were Germans and a couple of Poles.

Your commader was Lt Thoma, a correct person.
Thoma was a professor from Cologne where he used to teach Italian, a language which he spoke fluently. Each evening, when we were based at Vicenza, he used to take me to my sister’s home by gig, where we used to eat all together. Thoma treated us well, he was a good. He also set up a German course for his Italian soldiers. When we showed up at the course, we were ten learners, but the day after I was the only one left in the class. Then I quit that. However, at that point I already spoke some German and I became the interpreter.
The Italians from your unit were Lombards.
Yes, they were from Como and Lecco. Then there were myself (I am from Alseno) and a man from Bologna, who then disappeared.

Each 88mm piece was manned by seven Italians under the command of one German NCO.
Yes, our NCO was from Cologne, he was very dark haired, he did not even look German. He was more thief than the Italians. Once, he ordered me to follow him to Ferrara, we got to the railway and he got on the train. He threw two big boxes full of expensive sheets (requisitioned stuff) down the train. He kept one and he gave me the other one. I took it but then I did not take it home.

Could you please tell about when you shot down the aircraft?
When we were in Pontelagoscuro, near Ferrara, we were defending a bridge. Every morning at 10 a.m., aicraft formations used to come to bomb the bridge. They almost never hit it. They also directly hit a sugar factory. When it was hit there was sugar everywhere. One morning a Thunderbolt arrived, and we were ordered to throw ourselves to the ground while it was machine gunning us. I was on a raised position, consequently, had I thrown myself to the ground I would have been a perfect target. However, I saw him in the machine gun sight and I pulled the trigger. So, I shot the aircraft down. The pilot parachuted down among us, the poor creature was young. He was really good. The aircraft was already empty, he had thrown the bombs away on the other side not to hit us. He had machine gunned us, but he could have bombed us. He was respected. He was trembling, he was a young English-speaking officer. The Germans gave him to drink, they felt sorry for him. He was trembling.
In the end the aircraft destroyed the bridge. However, two days later, the Germans had already re-built the bridge, just under the water surface. They were quick. The bridge was also passable by means of transports, but one had to drive slowly.
If we did what we were told we were treated respectfully and friendly. However, once, as a punishment, the Germans had us marching in the rain. As a form of protest we sang ‘The Red Flag’, but they did not understand.
I was awarded the Iron Cross for having shot the aircraft down. What else did I want? I told them that I had not seen my family in one year. Therefore they gave me a ten days leave. I arrived to Cremona and from there I walked for two days to Alseno.
With my binoculars I saw the aircraft which were going to bomb Dresden. They must have been fifty formations. They shaded the sky. They told us not to shoot, otherwise we would have been buried by the bombers.
Then, Commander Thoma died and I did not see anybody anymore.

This interview was partially reproduced in Paolo A. Dossena’s book Operation Mallory Major from Below. Women and Men under a Hailstorm of Bombs (Fonthill Media, 2021).

The illustrations of the present article are from the Arrigo Francani Archive and are copyrighted. 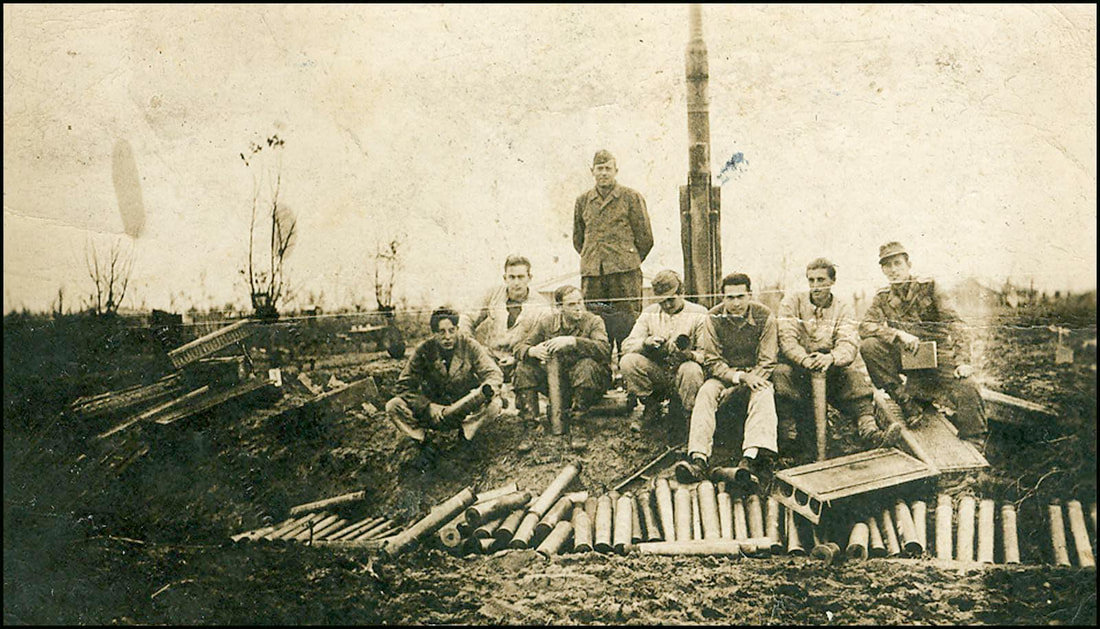 Franco Bacigalupi and his Flak crew.